The following is a close approximation to the eulogy I gave my long time fishing partner, Bill Greene. Reposts and reprints are welcome with citation of source. Trackbacks are appreciated.

I’m a little surprised to see the urn. There were mornings, while waiting for Bill at the boat launch, when I wondered if he would make it to today’s service on time.

I want to start by saying something to Bill’s wife, Vickie, that I think Bill would want you to hear at this point: Do not sell his fishing equipment for what he told you he paid for it. You would be giving somebody an incredible bargain.

Bill’s fishing equipment is nothing short of magnificent. He always took good care of it, keeping it in pristine condition. Bill was a talented craftsman and I believe this gave him a deeper appreciation of quality artistry than a regular person like me could have.

One rod in particular comes to mind, which I believe to be his favorite. I must have personally netted a thousand spotted bass Bill caught with it. He treated that rod with reverence. After every trip he’d pamper it, clean it, polish it…and, on some occasions, whisper sweet nothings to it.

I never figured out why it mattered to the fish if the rod was clean or not. But it must have made a difference, because Bill could catch fish when nobody else could.

He used finesse tactics long before they became widely used here in Alabama. Using light line, he could cast lightweight lures further than anyone I’ve ever seen. Even in high winds, where light lures are problematic for the rest of us, Bill could make them work. As a result, he flat wore the fish out.

As great as Bill was at catching fish, he did have a weakness. In the world of fishing there’s a game within the game that’s played at the dock. At the end of the day, you want to know how your catch compares to everyone else’s. If you’ve done well, you want recognition from your fellow anglers. But you also want to play it cool so you don’t come across as a braggart.

Playing it cool was not Bill’s forte. There were times I thought his head would explode if he didn’t immediately tell someone about the stringers we’d caught.

Bill would strategically park his boat so that folks had to walk by it. He’d wipe the ‘gradoo’ [scum line] off the hull, get it situated on the trailer, and lie in wait to ambush some poor fellow who happened to walk by.

“Y’all do any good?” the hapless victim asked.

“We did alright. I must’ve caught sixty.”

Modesty in the face of success was not what Bill was all about. One time, I asked him if he would tone it down a little. “Why?” he asked. “It’s true, isn’t it? Don’t discount our fishing prowess. Not many people can catch them like us.”

Now that I reflect on it, bragging is a significant part of the fishing culture. If I’m honest with myself, I have to admit that I liked the fact that Bill would say what I wouldn’t. I’m going to miss that. 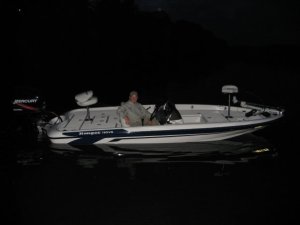 One day, I happened to know the victims who walked by. They’d struggled that day, were tired and sunburned, and Bill’s boasting rubbed them the wrong way. One of them shot me a look of disgust and asked, “Why are you friends with that guy?”

Those of you who aren’t fisherman might not realize the full significance of this statement. Unfortunately, I don’t have the words to do it justice. But I assure you that there’s a lot more that goes in to being a good fishing partner than chasing little green fish.

To give you perspective, consider this: Most men will have more good wives in their lifetime than they’ll have good fishing partners.

Other people who’ve fished with me say the experience is akin to being held hostage. Once they get in my boat, they never know when they’ll be able to get back off. My ex-wife still has nightmares about being trapped on the water, while I say, “Just one more cast, Honey. Just one more cast.”

In fact, as we speak, someone out there is probably being treated for Post-Traumatic Stress Disorder as a result of me saying, “just one more cast,” too many times.

But not Bill. Bill suffered from one-more-cast-itis just as bad as me. Together, we learned that if you make enough one-more-casts, then four o’clock AM is liable to sneak up on you, and you might discover you’ve been on the water for twenty hours straight. When this happens, we found it best to keep on casting, because the sun will be up soon, and you might as well enjoy the morning bite.

For the kinds of fishing we did, the most exciting part isn’t reeling the fish in; it’s the strike. In the first moments after hook-up, even the smallest fish will pull hard. That’s why, in those moments, most fishermen have no idea what’s on the other end of the line. But not Bill. He believed every strike was a big fish. And that’s part of what made him so much fun to fish with.

In my head, I can still hear the excitement in his voice, “Oh man, Bo! This is a NICE ONE!”

Like a kid at Christmas, he enjoyed every strike. He was so genuine and expressive, and in turn, that joy and his enthusiasm rubbed off on me.

The boats we fished out of are small: fourteen to twenty feet long. You can’t spend that much time—in that confined a space—with a person without getting to know them well. And, as someone who knew Bill well, I can tell you there was a depth to him that few people got to see.

On these boats there is a light pole that fits on the starboard-side transom. It’s positioned so the light sits above the motor, and can be seen 360° around the boat. It also happens to be in the perfect position to snag a lure when attempting long casts, causing horrible backlashes.

Like that light pole, life can make you backlash. It can snag your momentum when you least expect it, and cause things to get all tangled up in your head. In these times, I could always call Bill.

He’d say, “Man—When are we going to fry some of those fish we caught?”

Or, “Where do you think they’re biting?”

Or, “What color do you think they’ll hit?”

And as we’d talk, it was like he was backing line out of that backlash, untangling all the knots in my head. Keeping it in good condition, so that I could carry on, and make more one-more-casts.

William Lee Greene was my friend.

And Bill, wherever you are, I hope you’re catching them. And I hope the fish actually are as big as you think they are.