It’s time for TH8s to be given the respect they deserve. The catalyst for today’s topic comes courtesy of my friend, Boaz, Leader of The True Sons. While discussing a TH8 vs TH8 war, he said, “…every th8 is easy to 3.”

That was the final straw. “Every” is a strong word; used too loosely by Mr. Boaz.

I’m not picking on Boaz or Boneyard individually, I merely share their comments as examples of sentiment held by most. Unfortunately, there are too many swollen heads these days looking down their noses at TH8 attackers. It’s time for a reality check.

Contrary to common belief, max TH8s is a no-man’s land position on the war map where three starring your mirror can be hard. In this blog post I shall:

PROOF #1: My TH8 survived weeks of wars, being attacked up to 7 times per war, without being three starred by another TH8. If it were truly easy, at least some would have been successful.

I’m not saying that three starring it was impossible. In fact, I held my breath through many attacks with 95%+ damage that could have easily gone the other way. But the fact that it was not three starred by another TH8 is concrete proof that it was not an “easy” three star.

Note: The base is nothing special. It is an extremely common layout found at MatuGaming.

PROOF #2: Can you honestly claim that the squad of TH8s in your clan three stars all opposing TH8s in virtually every war?

You’re fooling yourself if you do. Sure, your squad might clear all opposing TH8s in a given war—you might even do it regularly, I know my clan does. But, if it were easy, your squad would be able to accomplish it in virtually every war. Remember, everyone gets two attacks. Even if the opponent has more TH8s than you–say 15 to your 10–then your squad should be able to use its 20 attacks to three star those 15 bases. There would be no excuse not to if TH8s were really gimmes as most claim.

I previously wrote that the war stats given by the game, such as average stars per attack, are useless. However, a stat that I closely monitor is TH9 vs TH8 attacks. Every TH9 attack on a TH8 should be viewed as a loss. Having closely watched this in many wars, I can assure you that TH8s clearing all opponent TH8s is not as common an occurrence as is widely believed.

Proof #3: If TH8s were “all easy”, then TH8 vs TH8 wars would result in ties with all bases three starred. How often does this happen? Rarely–not even in Onehive Genesis.

Unlike other TH levels, with TH8s the laboratory is on the critical path. By this I mean that if your builders are continuously working, and your laboratory is continuously upgrading spells and troops, then buildings and heroes will be complete before spell and troop upgrades. This results in TH8s with max defenses who are waiting on lab upgrades to complete before progressing to TH9.

You can stick your head in the sand if you want, but these bases are hard to three star with TH8 troops. Good base designs have centralized level 6 ADs, making dragon attacks difficult. But TH8 ground attacks are not powerful enough to get three stars on these bases either.

This is why I call high TH8s the no-man’s section of the map. It is very hard to three star your mirror at this level, but, odds are, many of your clanmates are under the delusional belief that it is easy. Personally, I had frustrating number of 90+% attacks while serving my sentence in no-mans land, and I don’t miss it a bit. I’ve noticed the fourth spell and/or AQ make an immediate impact. But if it were easy, these offensive boosts would not be needed.

Back when he was a TH8, he could three star anything within a quarter mile.

If what I say is true (and it is), why do people like Boaz think so differently? I can only speculate, but here are some theories:

TO SPITE YOUR FACE

Just for shits and giggles, let’s humor Boaz for a moment and assume that his distorted version of reality is true for the rest of us, and that “all TH8s are easy to three star.” If so, why would one repeatedly voice this? What do they hope to gain from being dismissive of TH8 accomplishments?

TH8s capable of taking out opposing TH8s are a big deal. This starts a domino effect that works it’s way up the map and helps the entire team. If it were easy, everyone would do it. Most clans can’t. A squad of TH8s three starring opposing TH8s takes teamwork and strong attacking skills. It is a significant accomplishment that should be noticed by teammates and not taken for granted with deprecating comments.

At the risk of being repetitive, let’s look at some examples of what I have and have not said. I agree with the following statements:

These statements I do NOT agree with:

Pallazzo is explaining why three TH9s attacked TH8s in a recent House of Zod war. I agree with everything he says– especially the part about that clan having excellent dragloon attackers.

I maintain that high TH8s are not easy to three star, and therefore there is no shame in some low TH9s dropping to clean up TH8s. I think this is common in most clans, and proves that some TH8s are not easily three starred by other TH8s.

Did the attacker use a fourth spell and/or an AQ? If yes, then don’t tell me that base was easy to three star. Extra firepower was needed to get the job done. 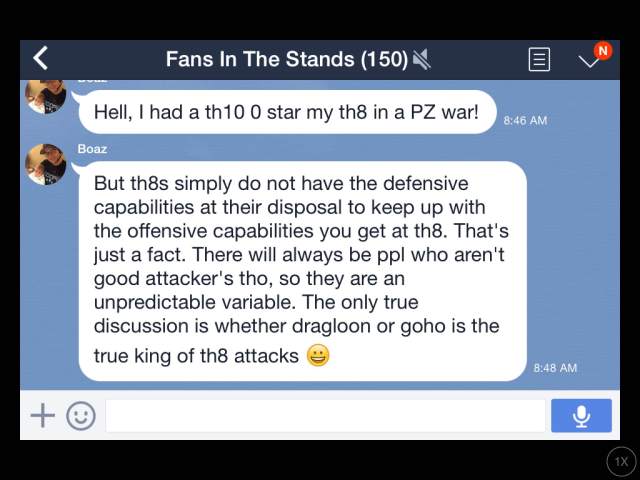 As usual, nemesis Boaz makes great points, but tries to slide the preposterous in between the rational. What will he say next? “These aren’t the droids your looking for?”

In my world, ‘easy’ means most people can do it. But in Boaz’s world, ‘easy’ is defined as, “a good attacker with max TH8 troops.”

What constitutes a “good attacker”? Do you suppose Boaz means if you took a random sample of all TH8s the top 40% could be classified as ‘good’?

Nope. Boaz’s definition of “good” is more like something he would see in a Hulk files or OneHiveRaids video. Kind of the same way a Kentucky basketball player would be ‘good’ when compared to anyone who has ever bounced a ball. Without admitting it, he has excluded 95% of TH8 players with his definition of ‘good’.

What about getting max TH8 troops? We’ve already established that upgrading spells and troops in the laboratory is what takes the longest (on critical path) for TH8s. This is vastly different than TH9 upgrade orders where heroes take the longest. So, according to Boaz, his definition of “easy” is TH8 players who have:

Most TH8 players I’ve witnessed get lvl 2 golems shortly before they upgrade to TH9. Players who know to upgrade them faster are usually 2nd accounts who’ve learned from previous experience what is needed for war. Therefore, here is the profile of the player that Boaz defines as “good”:

Okay Boaz, maybe you are right. A player who meets the above profile probably can easily three star a TH8. But fitting that profile doesn’t look easy to me.

One of the things that makes COC so addicting is incredible balance. Are we to believe that Supercell threw balance out the window for TH8s, but kept it in all other aspects of the game?

Give credit where credit is due. When your TH8 squad takes care of business, don’t shrug your shoulders as if it was a gimme achievement. Congratulate them on a job well done–they’ve earned it because it was not easy.